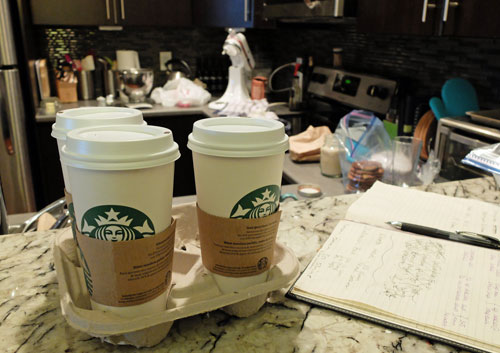 There are millions of people out there who love good coffee, but don’t make it at home.

I’ve been trying to figure out why.

As you’ll see in a little while, I think I may have been over-complicating this… trying to find some rational reason that just isn’t there.

But let’s start at the beginning, when I reached out to a few coffee lovers.

Jack and Sonya are in their mid-twenties, both have good jobs, live in the city… love good coffee… but don’t make coffee at home.

Like plenty of people, they really like gourmet coffee and know the good stuff when they taste it.

But for various reasons they prefer to get their coffee from a local coffee shop or even from a drive-through.

In the case of Jack and Sonya, they don’t brew their own coffee simply because they lack the confidence to make it well. They told me they actually have a French press sitting unused in a cupboard in their kitchen.

But rather than learn how to get the proportions of ground coffee to water right, they’d rather drive out and pick up some coffee locally.

So I asked them about using a single-serve system. No measuring or learning required.

Nope, they didn’t want one of those either. They just hated the idea of all those K-Cups or pods going into the landfill.

I suggested they could use a re-usable filter.

Still they shook their heads.

My guess is that even though they like good coffee, they just don’t want to be bothered with making it.

Next up I asked a single professional guy why he didn’t make his own coffee.

His answer made a little more sense to me.

He rarely drinks regular coffee. Mostly he orders espresso-based drinks. And he’s just not interested in the process of grinding tamping, brewing and steaming.

As for single-serve espresso machines, he doesn’t trust any kind of “milk” that comes in a plastic or aluminum package and doesn’t even need refrigerating.

By reaching out to family, friends and a few regular Coffee Detective readers, I got to speak with half a dozen or so coffee lovers who don’t make coffee at home.

I found myself telling them how easy it would be if they just chose the right brewing system. I was trying to change their minds… help them see the errors of their ways.

But here’s the thing... I think I was just over-complicating things and trying to push people into doing stuff they didn’t want to do.

Some people just don’t want to make their coffee at home. They’re rather go out and buy it from a coffee shop.

When I sit back and think about it, there’s really nothing wrong with that. And it’s not my job to persuade them otherwise.

After all – taking a different example - just because you like to eat artisanal bread doesn’t meant you have to make it yourself at home. In fact, getting out of the house, going to a local bakery and chatting for a minute or two with the people who do make the bread can add to your enjoyment.

For many people the experience of enjoying gourmet coffee includes the social aspect. Getting out of the house and going to your favorite coffee shop becomes part of the overall experience.

While some people like to make their coffee at home, others don’t. And that’s OK.