The Hamilton Beach “The Scoop” – a low-cost alternative to mainstream single serve brewers.

Over 25% of North Americans make their morning coffee with a single-serve brewer. The dominant brand is Keurig, although there are other contenders like Tassimo, Nespresso and several others.

I understand why these brewers are so popular. They make life easy. Add water to the brewer, lock in a K-Cup, disc or capsule, and press the brew button.

And you’re done. As they say in the ads...no mess and no fuss.

I’m just not sure people actually do the math on the true cost of using these brewers.

Regardless of the brand, you’re going to pay more than $100 for most models. Mid-range models will cost you $150 and up. Fancier single serve brewers cost more than $200.

Now for the cost of each cup of coffee you brew.

As an example, if you buy a box of 16 K-Cups of the Starbucks Breakfast blend, you’ll pay about 93 cents for each cup of coffee.

But if you buy the same coffee as loose beans or ground coffee in a bag, and brew it in a regular coffee maker, it will cost you about 33 cents for each 6-ounce cup of coffee you brew.

That’s right... for the convenience of using a K-Cup you are paying almost three times as much for each cup of coffee.

Which brings us to...

I wasn’t sent this brewer by the manufacture or some PR company. I bought it myself. Just to show you something.

Because to my mind, this simple machine is the thinking-person’s answer to single serve brewing.

First off, you can buy it for under $50. I paid about $40 for this one. That’s about a third of the price of a low-end single-serve brewer from the likes of Keurig.

Next, as you’ll see from the video demo, this brewer works with loose coffee. It has a coffee scoop that doubles as a filter.

Just scoop the coffee, place the scoop/filter in the brew head, press the start button and you’re done.

Does it take longer than using a K-Cup? Well, I’ll grant you that it might take you an extra two seconds – the difference between grabbing a K-Cup and scooping some coffee.

If you're a coffee lover who cares about the environment.

Billions of K-Cups, discs and capsules get thrown into the trash each year.  Last year alone over 9 BILLION K-Cups ended up in landfills. They’re not recyclable. They’re plastic trash.

Use the Hamilton Beach brewer and you solve that problem. You can put the used coffee grinds in your compost or spread them on your flower beds. And if you do put them in the trash, no harm is done.

If you have a single-serve brewer that keeps breaking down.

We have a few discussion threads on this site about how often single-serve brewers break down. Here is one of them.

Well, the Hamilton Beach brewer is much, much simpler in its construction, with way fewer parts that could go wrong. Plus it has a 5-year warranty.

Five years? We should run a contest to see if anyone has ever had a mainstream single serve brewer that lasted that long without having a problem.

So there you go.

That’s my pitch for people who like the convenience of a single-serve brewer, but would rather not pay more than they need to every time they brew a cup of coffee.

If you can’t find the Hamilton Beach brewer locally, you can get it on Amazon.com 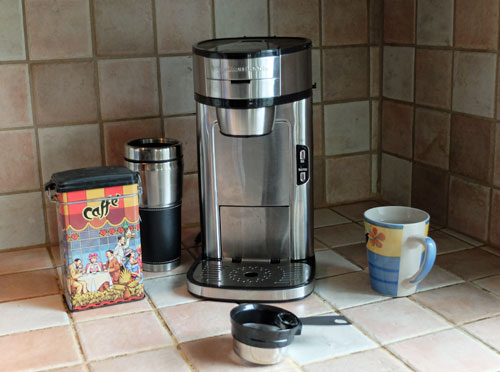 The Hamilton Beach "The Scoop". Single-serve coffee at a regular coffee price.

NOTE: This product was sent to us free in return for a review. (That said, we always reserve the right NOT to review a free product if we don't like it, or feel you wouldn't like it.)