The price of coffee – and the importance of buying Fair Trade. 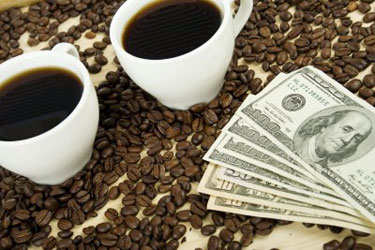 The price of coffee is influenced by numerous factors. Natural disasters like hurricanes can damage whole growing areas and push prices up. While the non-arrival of an expected frost can have the opposite effect and push prices down.

Coffee prices will also be impacted by trading behaviors at the world’s major investment centers. Coffee is a commodity and investors not only buy and sell at today’s prices, but also trade futures on its anticipated price in the future.

While weather and global trading determine the price per pound of coffee, there is one group of people which has no control whatsoever over what they are being paid. This group is made up of the farmers who actually grow the coffee beans.

What you see in the supermarket

As coffee prices go up, you'll see corresponding changes in the supermarket. This is particularly true of low cost coffee brands like Maxwell House and Folgers.

But often, rather than increasing the price, these companies will either reduce the size of the tins, or simply use lower-grade coffees.

Over the last twenty years the price of coffee has been consistently low, sometimes selling for as little as 50 US cents a pound.

Here are the prices per pound, in US dollars, in January of the last few years (it’s a composite price, averaged out across beans of different types and origins).

And as you'll see, the price doesn't always go up.

Right now, with the price per pound at a dollar or less, many coffee farmers are abandoning their farms.

In fact, many coffee farmers are now leaving their homes altogether and moving to cities, or trying to migrate to other countries.

Even when the price going up, you’d think this would be good news for small coffee farmers.

Not necessarily. Coffee farmers are often obliged to sell their coffee beans through a series of middlemen like brokers, warehouse owners and shippers.

When the price of coffee goes up, the extra cents end up in the pockets of those with most influence and power. As you can imagine, that includes almost everyone except the farmers.

What can you do? Buy Fair Trade coffee whenever you can.

You may not have any control over the price of coffee, but you can make sure that farmers get a fair price.

That’s what Fair Trade is about. When you buy Fair Trade coffee, $1.40 goes directly to the farming co-op which grew it.

And you don’t have to look for small, little-known companies to find it either. Many of the better known chains of coffee shops like Starbucks carry Fair Trade coffee. As do many online coffee stores.

The price of coffee per pound is completely out of the control of the coffee farmers who grow it.

It’s only through Fair Trade that they can earn enough to support their families and keep their farms.