Real Cups look like regular K-Cups, but they’re not. 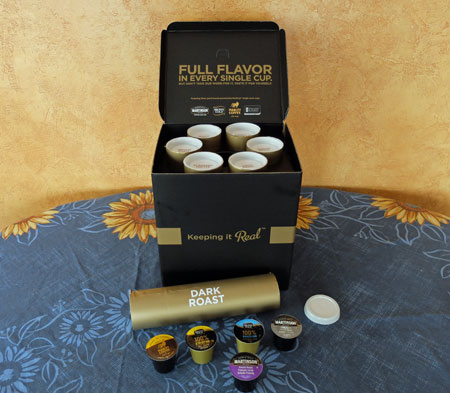 The folks at Real Cup sent us a sample box of their K-Cup coffees and teas recently.

At first I was a little taken aback by the amount of packaging involved. There is a lot of it, as you can see from the photo above. But then realized that this wasn’t how their K-Cups are usually packed and sold. It was sample packaging for people like me.

Also, to be honest, I was more than a little skeptical about these Real Cups being any different from the regular K-Cups I can buy locally.

I had a sneaky suspicion that the whole thing might just be a marketing ploy. All message and no substance.

But I also thought it only fair that I give Real Cup a chance.

My blind trial of Real Cups

I selected a medium-roast Colombian coffee Real Cup from the sample box, and also bought some regular Colombian K-Cups, also medium-roast, from my local supermarket.

I brewed both and then took the two cups to my wife, who is my fellow taster here at Coffee Detective. (Truth be told, she’s a better taster than I am.)

I placed both cups of coffee in front of her, without telling her which was which. I also put on my “poker face”, so she wouldn’t get any clues as to which coffee was which.

Well…time for me to eat some humble pie.

I didn’t think she would notice any difference between the two coffees. But she did. One of them she identified as being much, much better…with a broader range of flavors and a richer overall taste.

And yes, she chose the Real Cup coffee. And when I tasted the two coffees myself, side by side, I agreed.

How is this possible?

As I said, Real Cups look identical to regular K-Cups. 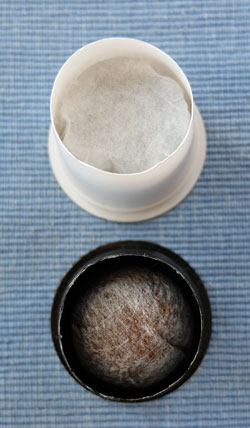 My next step was to cut the bottoms off both K-Cups and check out the filters.

In the photo to the right, the top K-Cup is the regular one and the bottom one is the Real Cup.

Yes, they look a little different. But you really notice the difference when you touch them.

The filter material for the regular K-Cup is thick and quite hard. You have to apply a little pressure with your finger to dent it.

But the filter material for the Real Cup is much, much thinner and a great deal softer. You can blow a dent into it with your breath.

While I don’t understand why or how the different filter material makes such a difference, it clearly does.

In spite of my original skepticism, I’m now a fan.

I often use my Keurig brewer first thing in the morning because it makes brewing a quick cup of coffee so easy, all the while knowing that I am trading quality for convenience.

With the Real Cup K-Cups I can still be lazy about making those first couple of cups each day…but also enjoy a better-tasting coffee.

If you want to try Real Cup coffee yourself - we particularly liked the Martinson Breakfast Blend – you can find out where to order them here.