UPDATE: Right now, in Spring of 2019, we're not sure this brewer is even available anymore. We see it marked as unavailable at Amazon. We'll keep this page up here for a while longer, just in case things change.

For other options... check out our single serve brewer page.

Onto our original review...

First off, many thanks to the folks at iCoffee for sending us one of their Opus brewers to try out.

As you can see from the video, we thought we would review it side by side with one of the original K-Cup brewers, the Keurig B60 Special Edition.

I did it that way because I particularly wanted to compare the taste of a single coffee from both brewers.

As you’ll see, I used a reusable filter in both machines. I did this because the coffee I chose is one I’m very familiar with, and usually brew with my drip brewer. Also, it meant I could be sure the coffee was fresh. I opened the bag and ground the beans immediately before I shot the video.

Had I used regular, sealed K-Cups, I would have had no control over the quality and freshness of the coffee. And when the coffee isn’t fresh, you can’t really judge how much the brewer has to do with the quality of the final brew. A stale coffee will taste disappointing, whatever kind of brewing system you use.

The iCoffee machine is a K-Cup brewer, just like the Keurig B60. But it has a different type of brew head. The folks at iCoffee call it spin-brew technology. 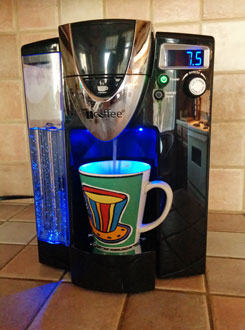 If you can visualize it, when the hot water is blasted in a downward direction only, there is a danger that the coffee in its immediate path will be over-extracted, while the coffee at the top of the K-Cup and closer to its sides will be under-extracted. Over-extraction makes coffee bitter. And with under-extraction you lose body and that smooth mouth feel.

Anyway, we did this comparison live. And in spite of the “spin-brew” difference, I didn’t expect to notice much of a difference between the two brewers.

How come? Because I’m old and cynical and tend not to believe what advertisers claim about their products.

Also, while waiting for the brewer to arrive, I watched a video review of the iCoffee brewer at cnet.com. While the reviewer didn’t conduct a taste test, he did conclude that the iCoffee was a disappointment.

So I was prepared to be disappointed too.

But I wasn't. Quite the opposite.

I have been tasting and reviewing quality coffees for many years now, and like to think I have a pretty accurate palate when it comes to discerning the strengths and weaknesses of different coffees and brewing systems.

There is no doubt in my mind that if it’s the K-Cup format you want, the iCoffee brewer is by far the best buy.

The coffee it produced wasn’t just a little bit better, it was a lot better.

You can buy the iCoffee Opus Single Serve Brewer at Amazon.com.

NOTE: This product was sent to us free in return for a review. (That said, we always reserve the right NOT to review a free product if we don't like it, or feel you wouldn't like it.) 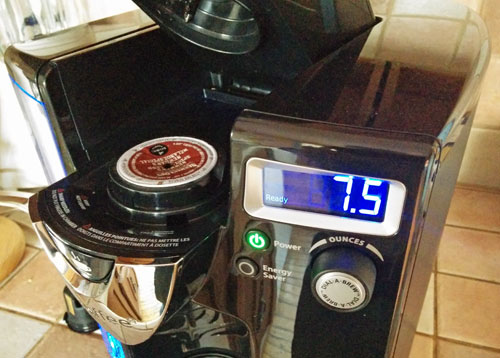 A closer look at the iCoffee K-Cup brewer display and brew head.