The video below shows me demonstrating one of the earlier models of Keurig K-Cup brewers, the B60.

You can still buy the B60, and other earlier models. And the basic system, with their patented brew head, remains largely the same, even with their most recent machines.

If you watched the video you now have an idea of how Keurig brewers work, and why you might want one. 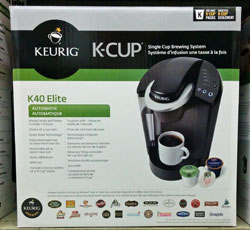 The Keurig K40 Elite, one of the original Keurig brewers.

These brewers are based on the original models. They basically work in the same way, but with an updated design and a few extra bells and whistles.

More importantly, these are the Keurig brewers that work with all those boxes of K-Cups you see in your local supermarket.

They also work with non-licensed, third-party makers of K-Cups.

Let me explain what that means.

When Keurig launched K-Cup brewers, one of their patents covered the K-Cups themselves. This meant that if another company wanted to put their coffee in K-Cups, they had to get a license from Keurig, and pay a fee.

That patent expired a while ago, and this has freed up any and every coffee company and roaster to make their own K-Cups and sell them. And they all work in these “original” Keurig brewers.

Hold that thought as we move onto the next group of brewers.

You can find a detailed description of each model - the B40 Elite, the B60 Special Edition, and the B70 Platinum here. 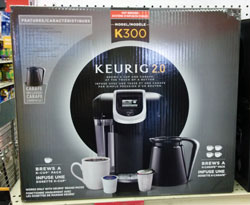 The Keurig 2.0 brewers are a little different.

They still brew single cups of coffee with K-Cups. And the system is pretty close to the original.

However, they also accept a much bigger type of K-Cup which is designed to make a 4-cup carafe of coffee. They call it a K-Carafe.

This is pretty neat. Here at home we use both a drip brewer and a single-serve brewer. We use the drip brewer first thing in the morning to make a full carafe, which keeps us going until mid-morning.

If we want another coffee after that we switch to the single-serve machine, and make one cup at a time. In other words, early in the day we drink enough coffee to warrant making a full carafe. But we don’t drink two carafes a day. Just one carafe and an occasional single.

If we got one of the Keurig 2.0 brewers we could do the same with a single machine. Make the carafe first, and then move on to singles. 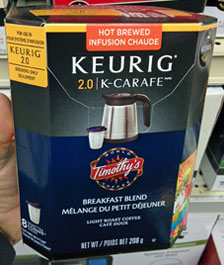 A box of Keurig K-Carafe packs.

But before you rush out to buy one of these brewers, let’s go back to that thought I asked you to hold.

When their patent on the K-Cup expired, Keurig got a bit annoyed by all the new competition. So they have built a new technology into Keurig 2.0 brewers that makes sure that the only K-Cups that work are their own, and those from licensed partners.

If you try to use a K-Cup from an unlicensed company, the brewer simply won’t work.

This has annoyed a lot of people, not least of all, coffee drinkers who don’t like being told which K-Cups they can use, and which they can’t.

All that said, Keurig and its licensed vendors offer a very wide range of coffees, teas and hot chocolate. So if you do buy a Keurig 2.0, you want be at a loss for choices.

As with the original brewers, you can find the Keurig 2.0 brewers on Amazon 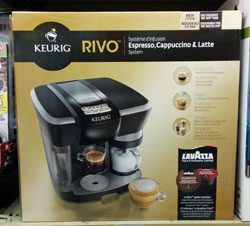 The third Keurig system is the Rivo system.

They created this is response to all the competitors, like Tassimo, Nespresso and others, who are making single serve machines that not only make regular coffee, but also espresso and espresso-based drinks like Latte and cappuccino.

And it offers something its competitors don’t. The system uses real milk...fresh milk from your own fridge.

I like this because I can’t help feeling a little suspicious of milk that is packed in a plastic disc, isn’t refrigerated, and has been on the shelf in my local supermarket for weeks.

But, and it’s a big one, the Rivo doesn’t make regular coffee. I wish it did!


Which Keurig brewer to choose?

Unfortunately, there is no single Keurig model that does it all.

For regular coffee, you can choose one of the original models.

For the option to make carafes of coffee as well, go for the Keurig 2.0.

And if you want to brew espresso-based drinks like Latte and cappuccino, choose the Rivo.

Flavored K-Cups for your Keurig brewer. 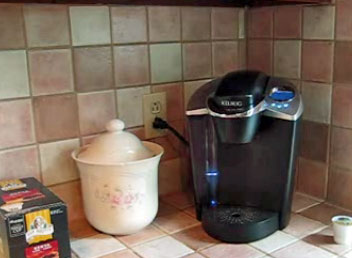 Our trusty Keurig B60, which we used at home for several years.